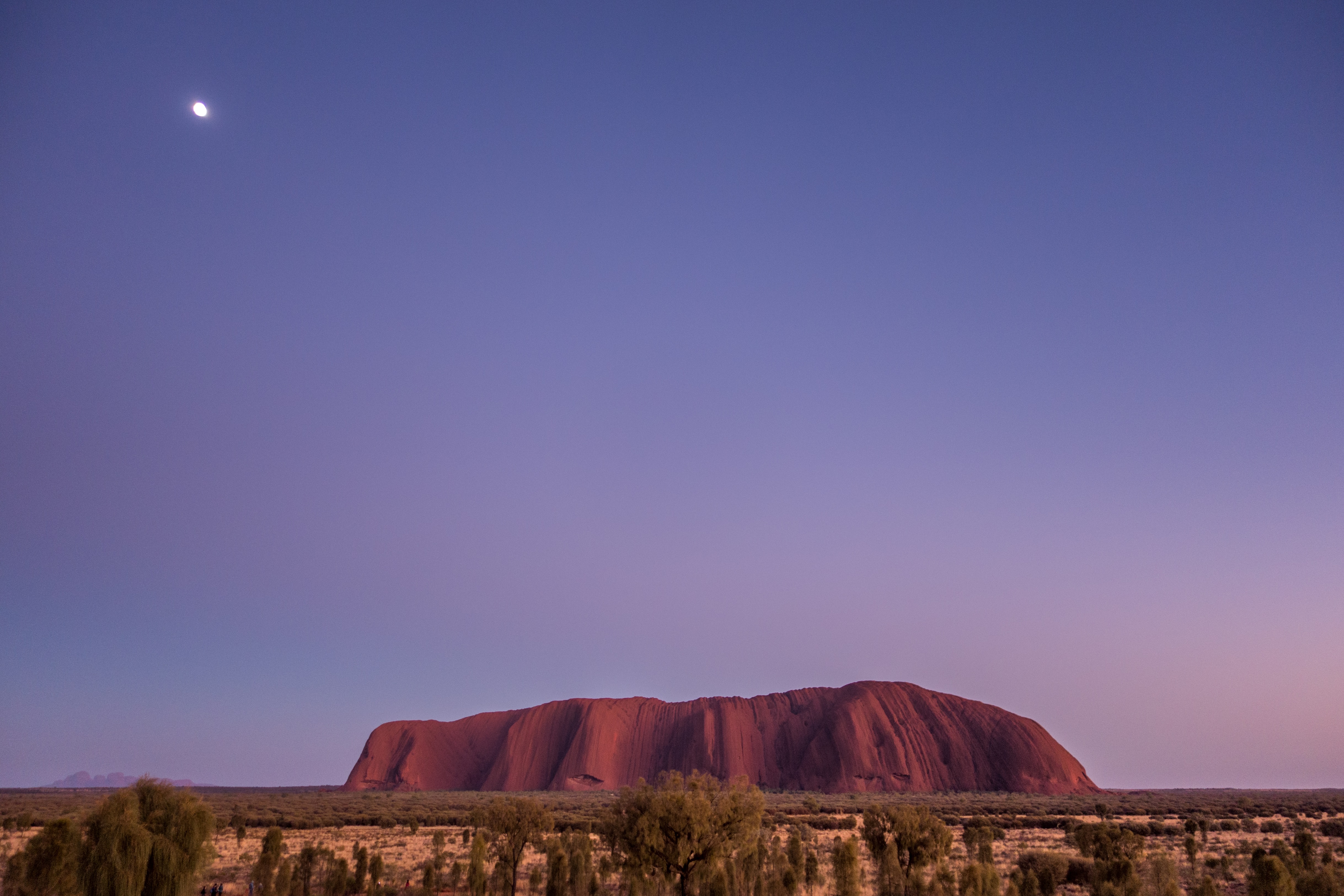 Following the science camp in Kakadu, 2 of our adventurers decided to push the limits of their bravery by travelling to the mysterious, overwhelming and fascinating heart of Australia, where the red earth fuses with the blue sky, the true outback, craddle of aboriginal culture.

Aurore and Karol arrived on time in Yulara, followed by Melody and Gauthier, who should have arrived before. But as usual, nothing happens as planned, othewise it wouldn’t be an adventure ! We just had time to set up the tents before heading to a special place where we could see the sunset on the famous monolith revered by aboriginal people and visited by millions of tourists each year (a few of them present at the same time and place as us…) : Uluru (previously known as Ayers Rock). A monolith means that there aren’t many rocks pieced together, but the whole rock is in one piece ! And it is thought to be the case down to at least 4 or 5 km below the ground. The monolith is composed of a special Sandstone called Arkose, which contains small grains of sand, quartz and feldspar (probably from the weathering of granite) and is actually grey. But small amounts of iron, oxidized on the surface, turn it into a vibrant red, and also protect the surface from erosion, which explains why the rock stands still, in the middle of a flat land, impervious to the effect of wind. What a sight ! A quite noticeable particularity of this monolith is that the bedding (the succession of deposited layers of sediments) is vertical. While this seems impossible to concieve at first, it can be explained by tectonic activity : during the formation of mountains, two tectonic plates collide, bend and break (faults). At some places, we can find them tilted at 90°. Above the monolith, the corresponding layer was probably faulted and displaced, only the bottom vertical part remains, unaffected by the weathering. After the sunset, we did some groceries and it was time to cook dinner. Unfortunately Yulara is currently out of stock for gas bottles ! But it does not affect the participants’ motivation in the least, and we still had a nice dinner with conforting brownie for dessert.

It was not the usual early wake up we were accustomed to, this time. All thanks to being in the center of Australia in winter. We prefered waiting for the sun to come out and reach our tents before getting our noses outside the sleeping bags. In addition to that, the wind made his appearence. Fortunately we are all well equipped and this is nothing for adventurers like us. Yesterday we noticed in the setting sun some rounded shapes in the distance, silhouetted in the horizon. Those are Kata Tjuta (the many heads). Time to go check them out. We drove for about 40 minutes to a first viewpoint where we could see the whole range of those domes, then we stopped a little bit further for a short return walk right between two impressives walls. Then after lunch, we went to the valley of the wind, a very pleasant 7,4km loop walk within the massif. It is formed of conglomerate, formed approximately at the same time as Uluru, but quite different. Although there is some tectonic activity visible, since the bedding is slightly tilted, it is nothing compared to Uluru. The multiple valleys and the round shapes are due to some cracks (from relieving the stress) on the surface, which eroded away with time, and ultimately formed those « heads » seemingly disconnected.

Very early start in the chill morning, in order to attend to the spectacular sunrise over Uluru. Of course, we wern’t the only ones with a similar idea. The wait was endless in the freezing cold. It was nice to get a hot coffee after that. It was all the more needed since we went to walk around the monolith. Yes, it is flat, but it is pretty long. It was a good opportunity to learn more about the aboriginal culture, since every corner, every feature, evrey rock has a different origin according to aboriginal legends. Once the walk was over, we had a long drive to our next destination : Kings Canyon.

The nights are getting colder, and the waking up-and-getting-out-of-the-sleeping bag are getting later. Well, the planned walks for the day were not very long so we could afford that. We first went on a ridge overlooking a green valley carved into some sandtones, in the Watarrka National Park. The view was spectacular. The shapes of the rocks on top are very peculiar : it consists of domes forming an regular array. This is due to plate tectonics that once caused stress in the sandstone layer, but in very distinct direction thanks to the direction of the moving plates. The resulting cracks were then eroded, forming with time some domes, quite well aligned. The deep valley below is also the result of a weathered crack. There are actually two different sandstones on top of each other. The lowest/oldest one (Carmichael sandstone) is actually quite soft, while the top/youngest one (Mereenie sandstone) is much harder, so the erosion manifests itself only after cracks appear. But once the crack is deep enough and reaches the Carmichael layer, lots of this soft sandstone disappear much more quickly, resulting in the fall of huge blocks above, sometimes along really clean cuts/cracks. The deepness of the valley allowed some good conditions for life to survive for a very long time (some plants are thought to originate from the dinosaur epoch). It is also interesting to learn that the Mereenie Sandstone is actually white, even though it appears red. Contrary to other places like Uluru, here it isn’t caused by oxydation of tiny amounts of iron on the surface, but rather by iron oxide dust ravelling with the wind and caught by small mushrooms who have a taste for these treats.

In the afternoon we went to see the Kathleen Springs, a nice natural pool, a real oasis in a dirty, rocky and dry country.

Some unpaved driving this morning, through the red center mountains (ranges). From the George Gill range, we went to the West Macdonnell ranges. Although the scenery was inspiring, the confort was lacking, on this corrugated dirt road. We had a nice stop in the inside of an impact crater from a meteorite (Gosse Bluff). Further on the way, we had the opportunity to enjoy global view of the remnants of this impact. Quite stunning. Later on we walked along a dried river bed until we reached some thin and steep gorges at Redbank Gorge. Finally, we ended the day at the Glenn Helen campground where we could enjoy the Sunset on some other famous gorges, cut by one of the oldest rivers on the planet (if not the oldest) : the Finke River.

A lot of driving today, and some nice geological stops along the way. The fisrt was at Ormiston Gorge, where old quartzite was thrust from several kilometres away on top of other quartzite. Then we stopped at Ochre pits, where the tectonics has tipped up vertically the layers from this region. The layers here are thin and contain different amounts of iron oxide and silicate, changing the colors of these now vertical layers. Further on the road, we saw the serpentine gorge (unrelated to the serpentine rock) that cut through two different ridges of quartzite. A little bit further, Ellery Creek Big Hole is a gorge where water has found the easiest place to cut through the quartzite : through a fault. One can also see the huge forces in motion that once created the mountains and folded continental plates when observing both sides of the gorge, and the quartzite heavily folded. The next stop was at Simpsons Gap. Again, the gap (or the gorges) are cut through some Quartzite, known as Heavytree Quartzite. This is the oldest (800 to 850 million years old) layer (and more resistant to weathering) from all the layers of the Amadeus Basin (a vast sedimentary basin in the center of Australia). Above it, between 7500 and 800 mya, some limestone was deposited and formed (Bitter Springs formation), then a succession of sandstones, limstones, siltstones and mudstones. This layer cake was folded and tilted during the Alice Springs Orogeny that created mountains as high as the Himalaya (from 450 to 300mya), and also formed Uluru and Kata Tjuta. The the erosin nearly erased everything, leaving only vertical layers in the MacDonell Ranges, thanks to the harder Heavytree Quartzite.

The morning was dedicated to a short excursion o the Esat MacDonell Ranges, into the Trephina gorge, some quartzite canyon displaying a nice colour contrast between the red rocks and the white sand. Further north, some old granite can be observed. Thanks to tectonic activity and orogeny, it was folded on top of already quite ancient quartzite. In the afternoon, Melody and Aurore took their flight back to Darwin while the other two rest at the camping.

Return to Darwin airport, where we parted ways.